Denis Isbister from Wild Fish Wild Places(www.wildfishwildplaces.com) tells us about his incredible, yet strenuous fishing trip to Jurassic Lake in Argentina.

The southern end of the Patagonia region, close to El Calafate is one of the most unforgiving and inhospitable areas I’ve ever visited in my fishing career. Dry, windy, barren and all around tough conditions. These things make it a pretty much uninhabited area with the exception of sheep ranches and GIANT rainbow trout!

According to Denis, Estancia Laguna Verde is the home base of operations for Lago Strobel, or as most have come to call it “Jurassic Lake.” The lodge has many fishing lagoons and depending on the time of year, the creeks are full of great fishing opportunities. Most people go there to chase the big trouts.

Denis, along with his buddy Martin, a 6 year veteran to Elv lodge, decided to make a hike one day to an area they call “the island” and the “aquarium.” Only a small handful of people have fished it the entire season due to the difficulty of the hike. It’s a 3-mile hike over treacherous boulder piles and slick rocks. The guys main focus was getting to the lake to go fishing. 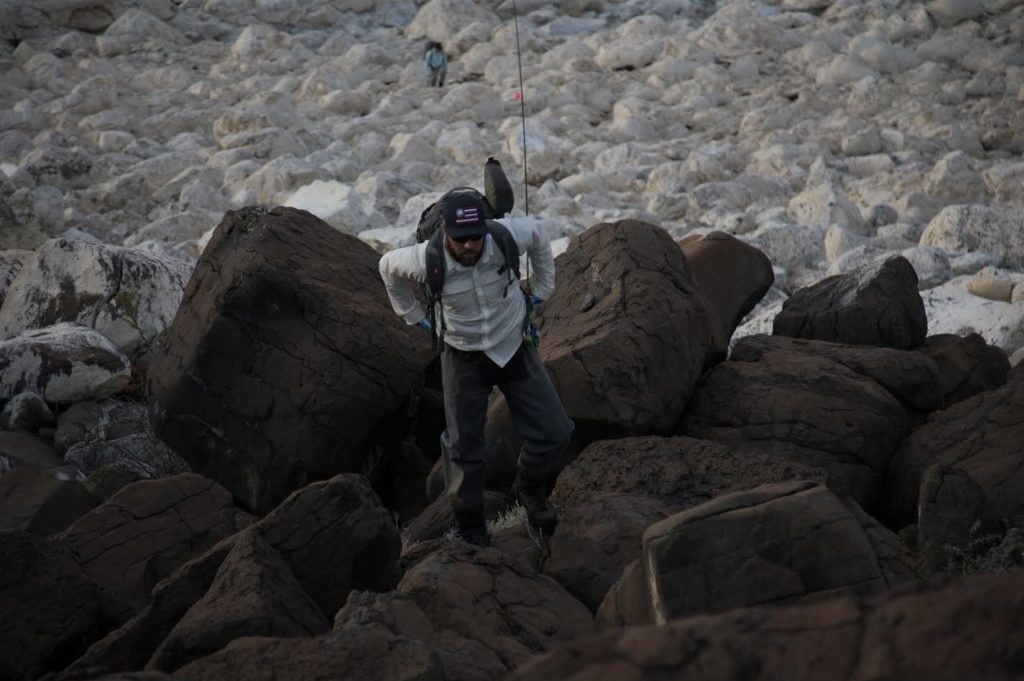 Even though the guys were tired from hiking they were determined to go fishing. The next day they drove as far as they could and loaded up their packs for the day. As they made their way down the giant boulder field crawling over rocks, and jumping in between crevasse’s they could hear the splashing of fish eating on the surface. That alone was enough to kick the adrenaline in to overdrive and keep them moving toward their first spot called “the island.”

“As we approached our spot Martin spotted the first fish immediately and lined Dreu up on the mark. As he pulled his olive jig fly loose from his rod and made a cast it was almost automatic, like the fish have never seen a fly….oh wait they haven’t! The fish turned with reckless abandonment and ate the fly like it hadn’t had a meal in a week. The fight was on the fish got airborne 4 or 5 times and made some fast runs finally giving up to the net and Dreu had his first 12 pounder of the trip” 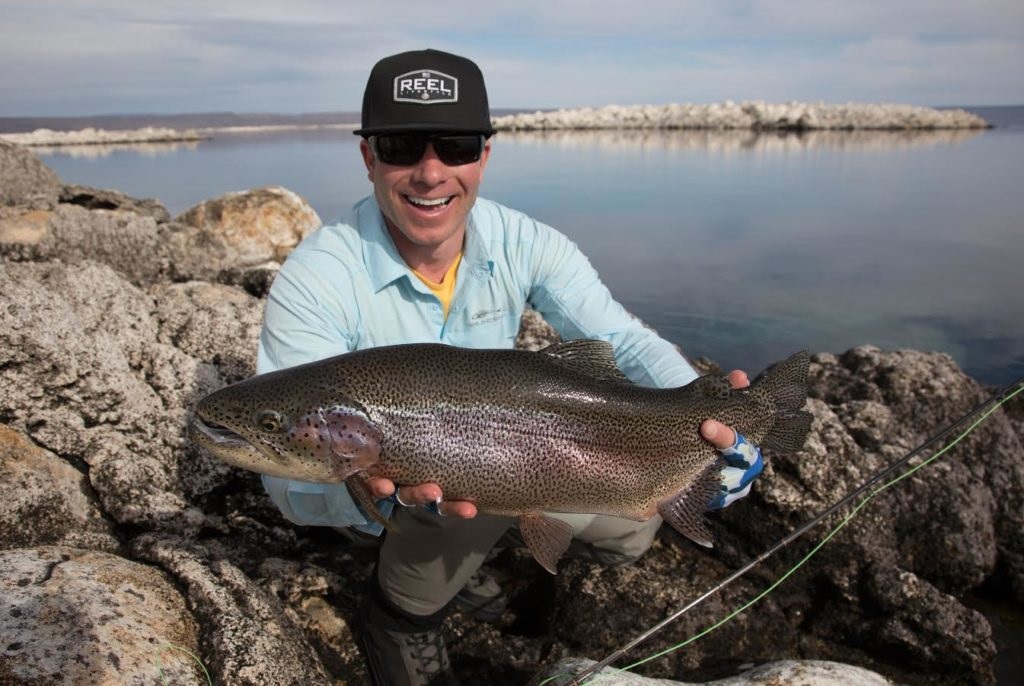 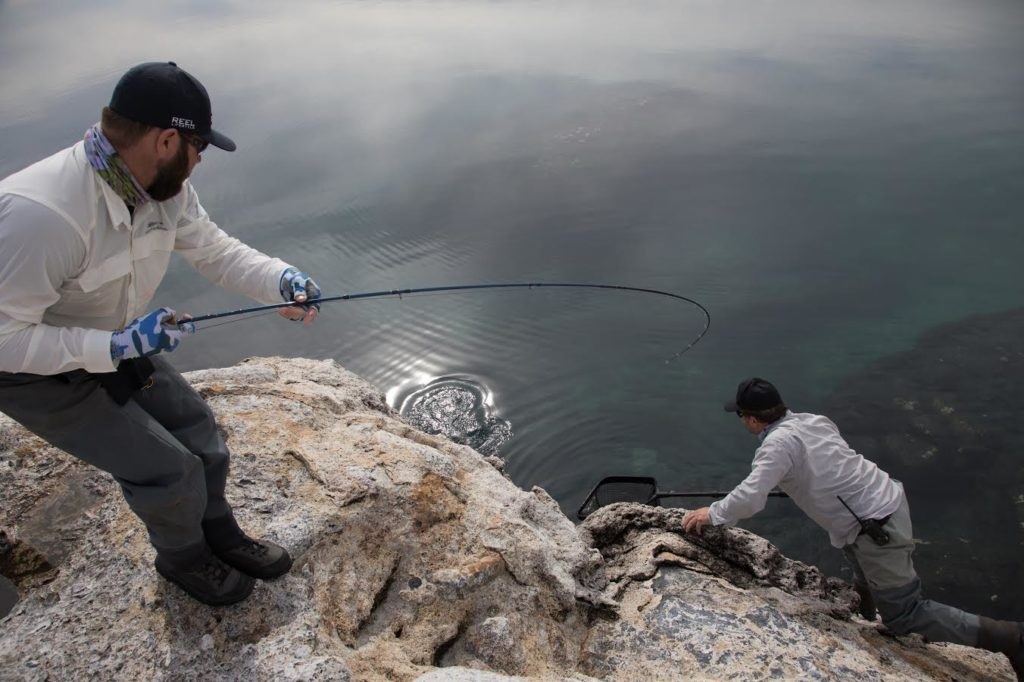 Denis decided he wanted to explore the area a little so he took his producer and started walking around. “We found a great spot high on the rocks with a deep water shelf within close proximity, perfect for big fish! As we looked around we spotted a nice fish cruising the shoreline and started making some casts to it. After a few rejections we changed colors and started back in with an olive bead head wooly bugger with brown hackle and a brown tail. I made a few casts and finally he bought it, the hook set and the fight was on. This fish knew the game, he immediately took me into the closest rock pile trying to break me free, then the next rock pile and again the next rock pile. This went on for 3 rounds in 4 different rock piles as I chased him one direction trying to keep him locked in when finally, I tired him out. Martin came to the rescue with the net job and landed this Jurassic Lake monster of 18 pounds. 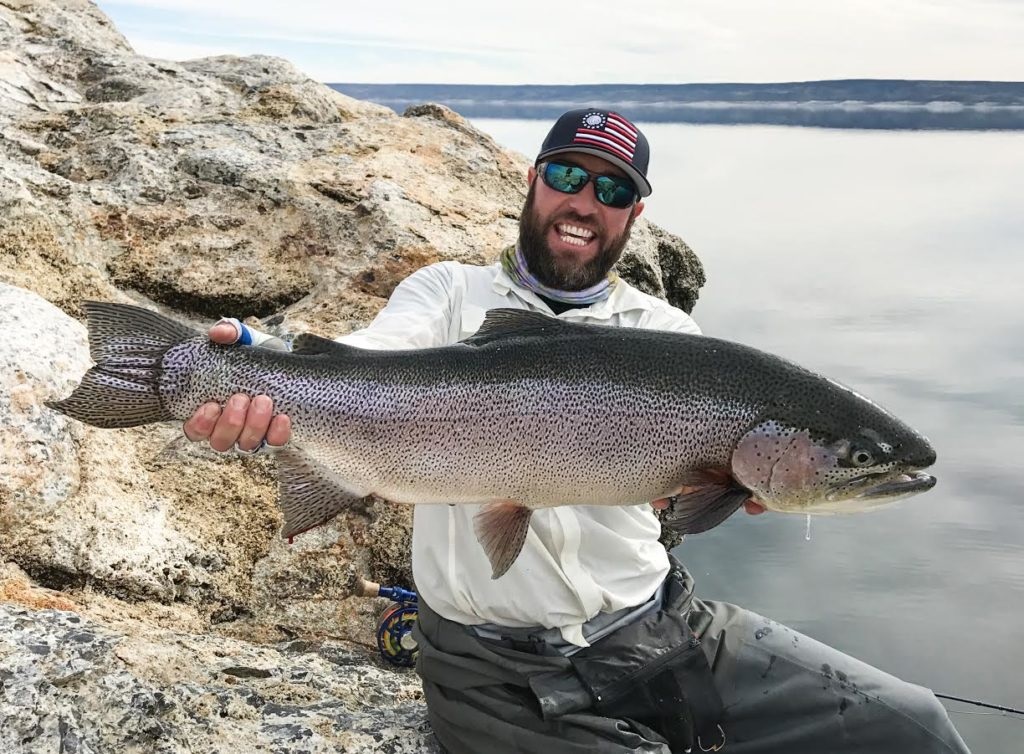